"The Creation of the Universe" - Raimy Sporl

"It’s black, most definitely, black and deep. Pitch shades swirling and tainting the skies, all skies. Passed thousands of atmospheric layers and closing clouds; lays the noir expanse of space. Space, it being deep and dark like cold lake waters; moody zodiacs and star systems dancing over an ebony lake. It’s surface slightly glossy, not quite matte, but shimmering with thousands of suns. Beautiful, that was space, beautiful lakes and oceans of black. Waves of special star dust fluttering like scattered pigeons throughout the lapping movements. Startled by every move in the cosmos, flipping and swimming, intertwining between solar systems. Planets rounding and rounding stars that go round and round the universe. The universe, a title of what surrounds us, wrapping up our planet and many others; into chilling arms. Cold arms looping around each curve of the cosmos. Commits wizzing and whistling through its solar plains, planets spinning like tops on black tables, stars flickering like burning light bulbs, and of course the silence.  Oh how quiet it was in space, the irate noise of silence. It is the best music to some, but endless torture to others. Quivering ear drums riddled with silence, frozen in time; like a broken clock. Never to tick or tock again. Planets moving universally through the dim, thick blackness. The blackness of time, like the pupils of an owl’s eye. Wise and black, old yet timeless. This was space, it’s black, most definitely.
So many places we have yet to reach, humans that is, but are so familiar to others. Others being the slimey and cumbersome creatures we make them out to be. You see the crazy, dim-minded men ranting about them on the corners of every block. Their flapping, course hair covered lips moving up in down. They are the bards of space. The bards that tell and warn us about aliens. Some would say they were crazy, just long, greasy haired men with no dreams and sense, rambling on about the end times and other worldly creatures. Little do many know, there is some truth to these tales that are preached oh so heavily as false and crazy. There are others, like some would refer to them as, aliens. Outside of our dimly lighted planet’s gaze, far away. Through sheets of rainbow ash and clouds of stardust. All mixing and whipping around like fierce winds, winds of miracles and pigmy rainbows of tye dye.
Here. Here far away from the bards, the crazies and the non believes, was what we all feared most. It was the unknown. Which was one of the most terrifying things of all. Striking fear into every living and nonliving being that happened to be born from light and organic matter in this universe. Meaning everyone. Everyone has and had fear of what they didn’t understand, or even of what they do. A women could study men her entire life but never be able to trust them after they raped her. A man could learn about weapons of war all he wanted, but he will always have fear when a large storm of military bombs come crashing down over his head. A mut could be beaten tens of times, but still never learn not to bark at the passersby. You, me and everyone has fear of the unknown. A sound could be heard in the basement of a home, and now the person living there is fearful of what it could be. A rusted pipe, falling from the rafters after years and damage? Or perhaps it was a dark spirit clawing at the flesh of he or she's children. The person living there may never know of what made that sound in their basement, that is the fear of the unknown.
The unknown was everywhere, even in the farthest reaches of space. When all the mermaids and whales and star gazing fish with wide, dead eyes are launched into the cosmos when our Universe was being created; they had fear. They feared that they would never see the sea again, never return home to the oceans of time. Swimming in the cosmos was lonely and tiring. So, they just died there. Their fins and gills and everything in between growing too tired and lonely to move. Before death, all their scales and hair fell off. It was the mermaids' gift to the Universe. Their long hair shriveling off into the blackness of their prison. As they were forever cursed to swim here, and so they wanted to die. Death was with them the whole time. Boney fingers swimming through the blackness next to them, pulling at their tails of scales and ripping out their hair. So these mermaids, and fish, and all other sea creatures died. Died quietly, this is why there is no sound in space. These women and men with long tails of fish, Pisces and Aquarius, even Capricorn and cancer; all dying in silence. The unknown rippling beneath their gills and clogging their lungs and fingernails. However, this is when the suns were born, the scales and hair waving and stretching eons into the light of the dark. The light of the pitch. The light of space. Rainbows and diamonds gleaming and splintering into pieces only to be formed into planets and stars and comets. All intertwining to create the people and the monsters. The scales and dead fish swimming in the afterlife of the dark, space, time, beings; isn't it all so unknown to us?"
Creation of the Universe 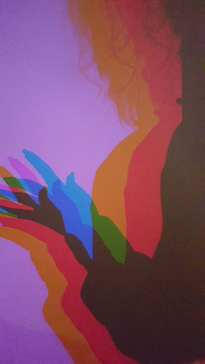