The Truth of War

1: What did we learn about in this project? During this project, I learned so many things about the world, things that I need to learn about to be able to listen to the past and spout about to the future. The Vietnam War: a giant part of our history that everyone in America tries to forget. It is a big enough deal that we know about it but can be seen as a little enough deal that some people don’t even know when it happened. Although it was dark and brought tears to my eyes, I found it so powerful. We learned about the start of the war -something I had never known before- and how it all came to be. Nothing we were taught was biased in any way; however, it did make some rethink the mentality of the government. In the beginning, a man named Ho Chi Minh believed that communism was the only way to save Vietnam from colonialism and the pain that came from the French. The U.S. had already been fearing the spread of communism since the Cold War and hearing this news of Vietnam caused everything to spiral out of control. Vietnam then began to split in two. Communism raged in North Vietnam and capitalism held onto the South.This is where it all began: the protests, the death, and the countless battles fought between America and the South and the North and the USSR. 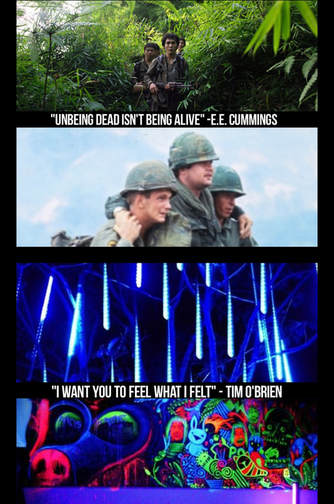 2: How did we exhibit our learning? After weeks of planning and editing, we the students had the perfect idea for an exhibition. An exhibition is a final project formed by all the information we had learned, and boy did this exhibition blow people out of the water. When the visitor first walks in, they were greeted by the first perspective of the war: the American family. In this room, viewers are taken back to 1968, a dinner table lay in front of them. The point of this room was to give the spectator a look into the sadness, fear, and anger some families had for the war. It was not only affecting the soldiers, mothers were left without their children, and fathers were left as the only breadwinners for their families. This room has actors playing roles of family members affected by the war; discussing the Gulf of Tonkin controversy and displaying the fear of communism.
In the next two room of our exhibition, viewers got a terrifying look at the war from the perspectives of the soldiers.  The spectators learned about the actual traps and weapons that would have been used against them in Vietnam. These two rooms brought a very emotional vibe to the exhibition, a wonderful way to show danger and passion. Soldiers’ letters home and poetry hung in the air, pushing people to read them. A real interview with a veteran of Vietnam was playing in the background and seemed to blend into the fog of the forests.
The Vietnamese perspective of the war was yet another room skillfully spun into our exhibition. The inclusion of this perspective made the whole exhibition even more powerful, most people haven’t seen the war this way and it causes deeper understandings to arise.
The last room was yet another at home perspective, expect from the protesters view this time. Protests were a large part of the Vietnam war culture and timeline. Crowds of draft dodgers, hippies and musicians (all played by students) sung protest songs and played their hearts out in hopes of ending the war. Posters and messages cover the walls in an array of hope and protest.
Each room couldn’t have been complete without the end of this exhibition: the timeline. What used to be a normal school hallway became a long passageway of time. A timeline hung on the walls, displaying the truth of war at last. From the colonialism of the French to the death of Ho Chi Minh, this wall gave viewers a bird's eye view of the war and everything that happened during it.
Above is an info-graphic style inspiration board I created. It includes quotes and photos of what I wanted this exhibition to look like.

3: How did you strengthen your skills during this project? How did you stretch yourself? I believe this project helped me open up more, and that says a lot. I find that I have the personality of what you would call a talkative introvert. My ideas are important, however, I seem to be more compelled to talk about the neighbor kid from out of town with ADD rather than talk about my ideas for my school project. However, I was just so excited and inspired to complete this exhibition that I got right on task, opened up, and spilled my ideas to the others in a constructive way. I did get off task many times, and I believe this is due to the fact that we had such a free-range space that it was just too easy to run away and go exploring. My collaboration was excellent, I loved spending time with each of my teammates, for they were some of the nicest people I have met in a while. Talking in the group was just as easy as listening to them, I had a good way of getting my ideas across to them. Challenge? Well, challenge wasn’t really a word that I ran into while working on this project; however, I believe that one of this biggest challenges I came across was conflicting ideas. No one is my room really had conflicting ideas, but outside groups really did. I had to struggle through comments like “This pizza is for people who actually helped make this exhibition look good” and “You aren’t really doing anything for this exhibition”. It was hard hearing stuff like this, especially when I was really proud of my work; however, I pushed through and ended up having fun while working at school. My main job during this exhibition was to play the mother character in the American family room. Before I came to Animas I was apart of Bayfield High’s theatre squad, so it felt natural to be acting all night. Overall it was a really great exhibition that surprised visitors and even some students when it was over.

4: How did this project change your thinking? What enduring understandings will you take away, and why? Over the span of this project, I retained so much information about the war and even changed my view on a few things. This unit made me rethink the mentality of our government and the will of each president during the war. Dwight D. Eisenhower, John F. Kennedy, Lyndon B. Johnson, Richard Nixon and Gerald R. Ford each had his own role in the happening of the war; some came to like them, while others tend to dislike most of them. Nixon was one of the presidents that really stuck out to me, for reasons of a negative light. I learned that he was more than I first thought, he helped in the killing of many Vietnamese people, and that's not all. As well as my view on the presidents changing, my whole perspective changed. Instead of just thinking about the soldiers and fighters of Vietnam, I had a look into what was going on in America. The “Hippie Movement”, the protests, the families left behind, and of course the men that got away from the war. So much emotion quivered in my heart as I watched the Kent State shooting and the anger in the eyes of draft dodgers as they burned their cards. In my eyes, the truth of war is hatred, that’s the only way I can explain it. Hatred for communism, hatred for religion, hatred for peace; and at the root of hatred lies fear. Fear is what caused America to step into those muddy fields, fear is what brought those young men into battle, fear crumbled America.